Passing by the AMF Laurel Lanes bowling alley on Saturday, things looked a little out of the ordinary: the side door of the building was propped open; a large, industrial-size dumpster was next to it with a work truck parked nearby, and the parking lot between the two was chock full of interesting-looking equipment and machinery. So we pulled in to have a look, and Jackie waited patiently (as she so often does) while I investigated. I introduced myself to AMF mechanic Michael Couey, who was nice enough to explain that the pieces of equipment you see in the photos are the mechanical workings – the business end – of 12 ten-pin lanes that were being removed from the 32-lane facility to make way for 12 duckpin lanes. 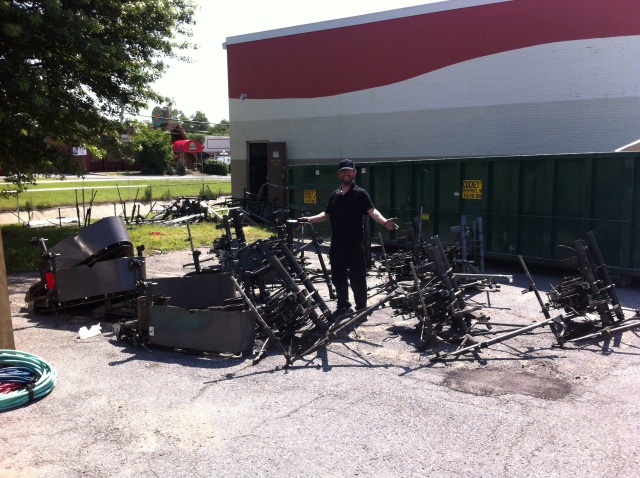 If you ever wondered what makes a bowling alley work, what resets the pins and returns the balls, there it was all laid out in the parking lot: all the oil and grease covered steel pipes, arms, gears, spindles and levers that, when you look at it, makes you wonder first of all, how in the world did someone come up with that? And secondly, with all the moving parts, and screws and nuts and washers, and all the vibration caused by heavy balls and pins slamming into the enclosure where it all operates, how does it all work so well with only occasional glitches? Heck, our Internet router, with no moving parts and sitting on a quiet shelf, is not as reliable. 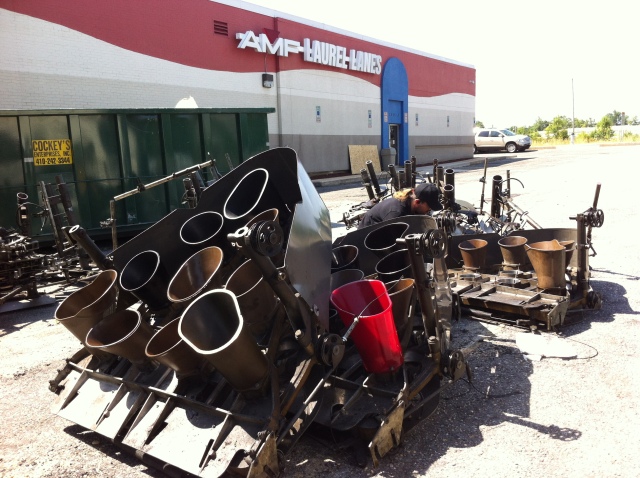 At the time, Couey was busy stripping the Brunswick 10-pin ball-returners and pin-setters of any useable parts before the bulk of all that steel was loaded into the dumpster for a trip to the scrap yard. I’m glad I stopped when I did because he made quick work of it: by the time I finished writing this on Monday, all of it was gone, the parking lot was clear again.

I also met AMF District Manager Shirley Pierpont who told me that the equipment for the 12 duckpin lanes will come from the College Park AMF Lanes. That install will begin the week of July 7 and they anticipate the duckpins lanes opening on September 1, just in time for the fall leagues. All during the changeover, the bowling alley remains open for business. 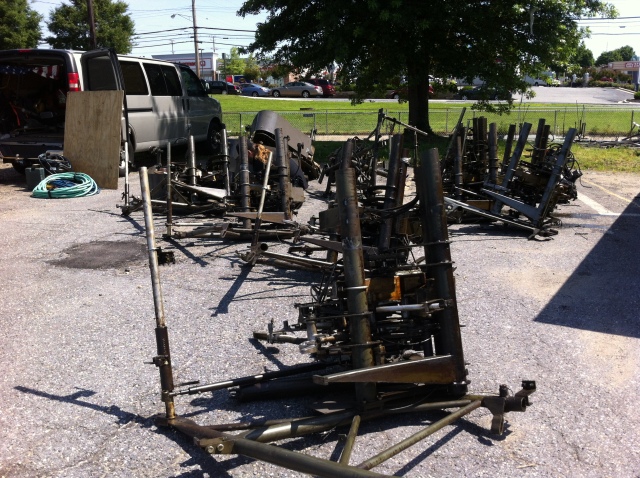 Pierpont, who has been with AMF for 10 years, also told me what many Laurel old timers already know: that Laurel had duckpins in the past. That was back when the AMF Laurel Lanes was the Fair Lanes Laurel, and before Fair Lanes Inc. was acquired by AMF Bowling Centers Inc. in 1995. The Fair Lanes Laurel bowling alley opened in 1961, and the last duckpin fell in Laurel in 1988. 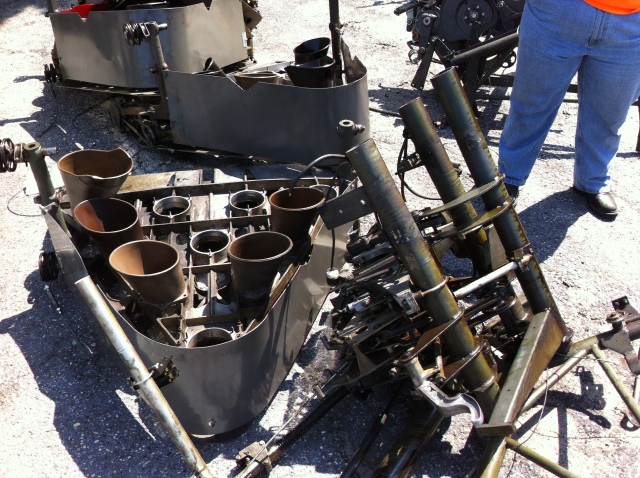 Pierpont wants everyone, especially seniors and youngsters, to know that in September, duckpin balls will roll again in Laurel at the AMF Laurel Lanes.

Richard Friend has some wonderful Laurel bowling history on his Lost Laurel site, http://lostlaurel.wordpress.com/2014/06/15/fair-lanes-bowling-for-patches/#comments. And as a former competitive duckpin bowler himself, I expect Richard will be one of the first in line come September.

2 Responses to Duckpins returning to Laurel